Posted on Saturday, September 15, 2007
Labels: Ethics , I see what you did there , puzzle games

Until now I had no real reason to talk about the Nintendo’s Virtual Console service for the Wii, but their recent announcements for the European and Australian VC have forced my hand. This month is the “Hanabi Festival.”

The Hanabi Festival is a chance for Nintendo to release a smattering of games that previously had not been available to EU and AU customers through normal channels. The games offered initally are Super Mario Bros. 2 (Famicom), Mario’s Super Picross (Super Famicom), with other unreleased games like the incredible N64 title Sin & Punishment becoming available for download at later this month. 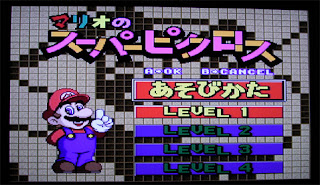 While I applaud Nintendo’s decision to release some Japan only titles in the west, I must admit that I’m kind of upset with the way in which they’re releasing them. Nintendo is brazen enough to ask for an extra $1 for the games offered during the “Hanabi Festival.” Oh, and games like Mario 2 will only be offered during the festival. Yeah, not only do you have to pony up more for the game, you have to buy it before the end of September (I guess that’s one way to insure strong VC sales).

In addition to the insult of having to pay more for these games, Nintendo is even cutting back on localization for these special limited time VC releases. Mario’s Super Picross doesn’t even have a

English title screen. I guess that’s what Nintendo meant when they called it a “Hanabi Festival,” Hanabi must be some 27+ stroke kanji that roughly translates to: “pay extra for a game that isn’t localized.” I guess this is all just a test by Nintendo to see just how deeply they can stick their thumb in our eye before we collectively close our wallets.