Posted on Thursday, September 6, 2007
Labels: History , you made me do this

They are endlessly fellated in print and frantic sweaty conversations between retro gamers and spastics in t-shirts with Nintendo and Atari joy pads on them that say things like “roots” and “Wizard Needs Food Badly.”

Scads of old games are fun, but then as now only a select few games are destined for greatness. Why are some titles held up as shining examples of game creation if they’re no fun to play. Mouth breathers will cry out: “Dragon Mother 2: Eternal Rapture is important! It shows the evolution of the genre!” That’s wonderful, but it doesn’t mean I want to replay a RPG from 10 years ago that has a poorly designed battle system just because it spawned 6 other similarly titled games that were more fun to play and don’t have onerous controls that makes me wish I could smash my hand with a hammer in lieu of continuing to play. 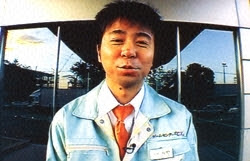 Despite the negative opinion of retro games expressed above I should point out that there are many worth playing, which brings me to Game Center CX.

Game Center CX is a late night Japanese TV show staring Shinya Arino, it chronicles his attempts to beat retro video games on the original consoles; no emulation, no save states, no refuge.

Game Center CX show should be viewed by all who claim retro gamer "cred," it will hopefully remind them of that some games are best left as memories. Most episodes start with Arino describing the game that is to be attempted in the episode, his whimsical & nostalgic descriptions often shift quickly to very real frustration as he proceeds to spend literally hours attempting to beat the classic game (in Ghosts 'n Goblins first level, he is killed countless times by the Red Arremer). While I can sympathize with Arino’s situation as he is forced to plow through over 60 "classic" games (including the Japanese JJ & FJeff [カトちゃんケンちゃん] and Takeshi’s Challenge [たけしの挑戦状] ), I must admit to enjoying his suffering as he plows through one game after another. I can’t help but think that most of these games are better left in the past.

Next time you have to suffer through some neck-beard telling you “retro games are the best. . . Mappy is the best game ever!” You can suggest they watch this show, maybe if they’re smart enough they’ll understand that Game Center CX is as much an indictment as it is a acclamation of “retro games”

To learn more about Game Center CX you can visit Wikipedia, or watch some of the episodes here.