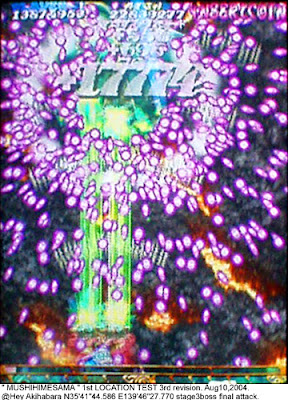 Vertical Scrolling shooters are good fun, however some individuals would use the descriptors “stale” or “dead.” Despite these nay-sayers, classics such as Xevious still are still available in the retail channel thanks to Xbox Live Arcade and Virtual Console.

The Vertical Shooter genre and”SHMUPs” in general have evolved over the years in a way that is similar to evolution of vs. fighting games. Early games in the genre are simple and complexity grows over time as those who enjoyed the games as players become developers and build complexity into new games that requires players to have a deep comprehension of the game morphology relating to that specific genre. In both vs. fighting and SHMUPs this has led to an incredible level of specialization.

When it comes to vs. fighters there are many dedicated developers still at work: ARC System Works (Guilty Gear), Examu (Arcana Heart & Samurai Shodown V) and SNK (The King of Fighters, Last Blade). They produce fighting games that appeal mainly to long time genre fans of vs games. There are fewer developers dedicated to SHMUPs: Alfa Systems (Shikigami no Shiro II & III), G.rev (Border Down & Under Defeat) and Cave (Ketsui & Mushihime-Sama).

I consider myself an avid gamer, but I’ve always been quite poor at SHMUPs, but playing the intricately crafted games produced by Cave turned me on the SHMUPs in a big way. Cave’s shooters are a masterwork of 2D animation, A ballet of bullets fills the screen, blotting out all the terrain scrolling beneath the play area. Cave’s games require so much precision that they have created a new sub-genre within SHMUPS, the “bullet hell” shooter. Over the summer, I became obsessed with Cave’s games and resolved to own one for home play. Being a (somewhat) sensible man, I promised myself that I would not buy one of these games unless I was properly committed to the genre. To prove to myself that I would be able enjoy a Cave game PCB I would not buy one until I 1 credit completed the Neo Geo scrolling shooter Blazing Star. 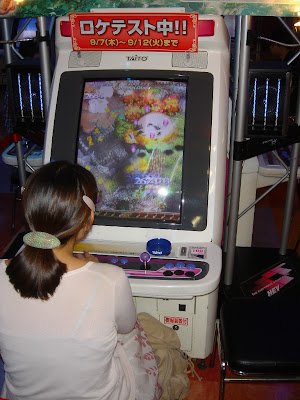 The rules for beating the game were simple, Beat the game on one credit. I believe that whoever said “The devil is in the details” was actually talking about 1 crediting SHMUPs, the level of commitment and repetition is mind-numbing for all but the most obsessive players. To make a long story short, I managed to 1 credit complete the game after roughly 12 hours of practice on arcade difficulty (MVS difficulty) and I hurt my wrist because the game lacks auto-fire. While I am proud of my accomplishment, I know that Blazing Star is not that difficult and I have resigned myself to merely viewing videos of expert players 1 credit completing Cave games. I can afford the steep price of entry required to buy a Cave game and have immense interest, respect and enthusiasm for the SHMUP genre. However, I am simply not dedicated (or crazy enough) to play them correctly, so I’ll just stick to console ports and emulators.