Supple Think: Rise from your grave

Rise from your grave 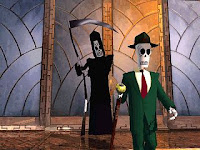 A decade ago,
Adventure Games died.

A good place to look for examples of the genre's death this is LucasArts. After Grim Fandango performed poorly in 1998, the lackluster sales of Escape from Monkey Island caused LucasArts to abandon every project that didn’t have “Star Wars” in the title. Other companies were having the similar problems, Westwood Studio’s Blade Runner did poorly the previous year and Sierra Entertainment had stopped producing adventure games. In a round of layoffs Sierra fired a quarter of their workforce; including Al Lowe and Scott Murphy, who created Leisure Suit Larry and Space Quest respectively. It was a sad time to be a PC adventure game enthusiast, some say 3D games in general and the proliferation of First Person Shooters specifically killed the adventure game genre. There are other theories about what killed the genre, but I’m not writing this to mark the 10th anniversary of Adventure Gaming’s death, I’m celebrating its return. 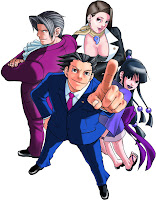 The Nintendo DS has become the new home for this timeless Genre. The first time I realized this was when I picked up Phoenix Wright: Ace Attorney in the Fall of 2005, the game is a classic point & click adventure that gained popularity via word of mouth and has had multiple repressing by Capcom. Phoenix Wright’s two sequels in 2006 and 2007 did equally well and I can say that the ending of the 3rd game ties all three together into a fun and memorable trilogy that I enjoyed more than most adventure games I played on PC. Even though Phoenix Wright is an adventure game with some mature themes (almost all the cases revolve around murders that are somewhat grisly), the game has an “animu” flavor that is impossible to ignore. Luckly, there are alternatives made by the developer Cing.

After Cing’s first forgettable DS adventure game Trace Memory they developed the mesmerizing Hotel Dusk: Room 215. Hotel Dusk has the gameplay of a adventure game, a classic point & click interface with a FPS navigation twist, visuals that are mature and seem fitting (I love the whole “Take On Me” look) and a story that is right up there with the best PC games of yester-year. When I started playing, I couldn’t shake the feeling that I was playing Icom’s Déjà Vu. The atmosphere of Hotel Dusk is so spectacular that I want to go back and play it for the first time all over again. I cannot stress the following enough: If you love adventure games you need to play Hotel Dusk. 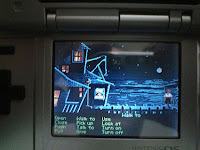 Most people probably never expected Adventure games to make a comeback, the best part of all of this is that most of the people picking up these new games have never played a Adventure game before. It’s unlikely that they’ll go dig up old PC games to play on their PC, but the classics are available to them via another channel. One of the programs available to people who choose to hack their Nintendo DS handheld is ScummVM, a emulator designed to play adventure games by LucasArts, Sierra and other developers.

The reason I’m writing this today is because I finished Phoenix Wright 3 last night to clear up some of my game back-log to make room for both Apollo Justice: Ace Attorney (a.k.a. Phoenix Wright 4) and Professor Layton and the Mysterious Village. While I know exactly what PW4 is going to be, I approach Prof. Layton with high expectations, the game is very popular in Japan and spawned two sequels. The visuals of Prof. Layton reminds me of the excellent 2003 French animated film The Triplets of Belleville. I’m quite excited about these new Adventure games, their arrival is another sign of the Adventure genre’s return to popularity.