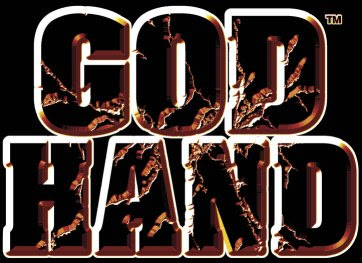 Where Okami makes love to you, GOD HAND rapes you into tiny pieces without even noticing you're there. Remember when games weren't just hard? Remember when you needed not just the skills but the right constitution to finish a beat-'em-up? Besting GOD HAND is a triumph of will, a demonstration of one's ability to go beyond playing the game and take up the reins of one's own destiny. To complete GOD HAND is to face one's ownmost, inevitable, yet indefinite potentiality-of-being. As born, the player undertakes the journey. Dying, the player discovers the resoluteness to complete it.
GOD HAND gets a lot of gruff for being "too hard". I'm here to tell you that that is an ignorant thing to say. Despite its difficulty, GOD HAND is one of the most fair games I've ever played, and while it is extremely difficult, it has a scaling difficulty system that lets you and the game reach a natural equilibrium while still rewarding skillful play. There are two different kinds of super-powerful attacks that you can use strategically, and every time you die in the game you not only learn a ton from your mistakes, but also get to keep any moves and cash you picked up. This is an example of one of GOD HAND's most brilliant accomplishments: the complete abandonment of archaic and irritating game behavior.
Every single power-up item an enemy drops or you find in a crate will stay on the level indefinitely. This means you don't have to waste a healing item when you don't need it, you don't have to break your combo to go pick stuff up, and you can plan your use of powerful moves based on what items appear. Not only that, but if you do pick up an item that you don't need, you get money for it instead.
There's a lot of other surprising little touches that show the game's fairness. When you use a weapon on enemies, it'll break after a certain number of hits, but you can use it to break open all the boxes you like. Punching exploding barrels doesn't blow them up, and there are unlimited continues with frequent checkpoints. GOD HAND is not difficult because the game environment is arranged to be stingy, irritating, or punishing. GOD HAND is difficult because you don't know how to play it yet.
To get good at the game, you'll have very little tutorial to rely on. Practicing with every move, studying enemy behavior, mastering the subtly versatile dodging system, and managing your tension meter are all genuine skills you develop as you make your way through GOD HAND. You can actually learn a lot by watching other people, as I did with this thread.
Besides the fact that the gameplay is super rewarding, though, why should you play GOD HAND? Because it's hilarious. Anyone who's played a Resident Evil game knows Shinji Mikami's knack for B-movie kitsch, but the celebrated campiness in this game has been turned all the way up. Dialogue between the protagonists is awkward and nonsensical, charmingly childish, and never tries to be genuinely moving. All the characters have literally the most awesome names possible, and the animations and subtle gags are better than I can possibly describe. Every single note is hit perfectly.
In the end, the experience of playing GOD HAND is put best in the words of a scantily-clad woman you rescue from a pair of dominatrices:

I can't believe this is happening! They smacked my ass so many times... But in the end, I started to like it!