Supple Think: To Begin Your Adventure, Turn to Paragraph 1

To Begin Your Adventure, Turn to Paragraph 1

Have you ever heard of Choose Your Own Adventure books? Those stories that were cut up into sections that you could navigate through, resulting in a story that had multiple endings, mostly involving horrible deaths? Sometime in the early 80's, several publishers got the notion to merge that concept with light RPG elements, like an inventory, simple combat system and player statistics.

There were a lot of these 'gamebooks' as they were called, with many series. One of the more successful series were the Fighting Fantasy and Lone Wolf series, both of which got started in the UK. But then computer and video games went on the up-and-up, Nintendo resurrected the home console market, and gamebooks were slowly but surely edged out of the limelight, dying a quiet death in the mid-90s. Some do live on, like the Lone Wolf series, now available for free on Project Aon, but most are only dimly remembered.

After reading through many gamebooks, I started to wonder if maybe they were one of the many precursors to video games. Not a direct ancestor like pinball tables and slot machines, but more a distant ancestor, like pen-and-paper RPGs. They started out as interactive novels, and then gradually evolved into what amounted to be solo role-playing game modules. Consider, you have a self-contained story with a concrete beginning and end, and a few differing paths that lead you to the end. Each adventure follows a core set of rules, but individual adventures may have additional, unique rules of their own.

What we're talking about here is some basic video game anatomy, I'd say. Only, instead of graphics, sound, and a computer processor, it's the prose and the player's imagination that help generate the game world. Additionally, writing a gamebook also requires design considerations that are similar to those of a video game. It demands efficiency, balance, and flow. 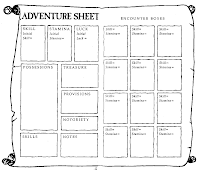 Because of these reasons, I think writing a gamebook would make for an interesting exercise in game design. In order to make it halfway decent, you're going to need a compelling plot. The plot needs to be alterable based on the player's choices, but it should also loosely follow a set path. Combat and other hazards need to be spaced out and balanced so as to not frustrate the player. And then you will need various 'error checking' devices, to check the state of the game and the player. Oh, and you have 350 to 400 'nodes' to use in order to accomplish this. The folks at the Fighting Fantasy Project also think that making a gamebook is an interesting notion, and have several home-brew Fighting Fantasy gamebooks up for your perusal.

While gamebooks are pretty much a forgotten medium, I find the 'what-if' scenarios amusing to think about. Would gamebooks have survived if computer and video games had not taken off like they did? I think they would have. I imagine various publishing companies competing with various rule systems. Pen-and-paper RPG companies getting in on the game with solo campaigns in gamebook form. Bootleg books made by home-brew writers, hastily xeroxed and stapled together. Open Gaming License analogues allowing independent writers to create, publish, and sell their own books that use existing rule sets.
But inevitably someone would figure out that you can add video and audio to electronic gamebooks, and then we'd be back on the path to video games again. This outcome is not too far off from what happened in reality, actually. Not that gamebooks birthed video games, but rather that gamebooks evolved and merged with video games, living on in spirit in text adventures, visual novels, and other forms of interactive fiction. Seems inevitable, I guess, that the limitations of a medium would force the craft to either evolve or stagnate.

Hopefully I've at least piqued your curiosity regarding this near-forgotten type of interactive fiction. You can find a positively encyclopedic listing of gamebooks at Demian's Gamebook Web Page if you've exhausted the other links I've provided. Article Permalink
Older Post Newer Post