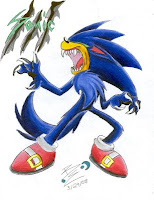 It's that time again! Sonic Team has made another Sonic the Hedgehog game, and when they're not working out the appropriate anglo-saxon-derived hedgehog equivalent for "werewolf" or arguing over the continuity of the Sonic storyline, Sonic apologists are going to start coming up with arduous and ornate explanations for why this new game deserves an 8 out of 10.
Leaving aside the already-too-late aspect of lying to convince yourself the game you're playing is merely "not terrible", there's a legitimate and compelling sadness to the history of this franchise. Everyone will talk about the glory days of Sonic and you know they're talking about the Genesis games. Sonic Adventure was compelling, especially for its time, but it can hardly be recommended now. The sequels have each spread another layer of sadness on Sonic fans' hearts, culminating in the absolutely abominable 2006 game that was simply, blasphemously tarted around as some kind of replacement flagship under the title of Sonic the Hedgehog.

That Sonic Unleashed is an improvement is effectively tautological. Don't let fans' relief of this mundane fact fool you into spending dollars on this new entry. Over the years much effort has been spent getting to the bottom of A: what made the old games so great and B: what makes the new ones so execrable, and while answers vary one thing remains constant: Sonic Team is not interested in answering either question.

At first people thought they wanted a game where you go as fast as possible, since Sonic games' claim to fame was always that they were really fast-paced, but over time this has been proven completely wrong. Going as fast as possible means either barely interacting with the game as it holds your hand through automatic sections or constantly losing because you can't react to what's happening on the screen. The former is pleasant but quickly unrewarding, and the latter is absolute hell. Both issues have plagued the series in 3D for so long they can now be considered hallmarks. 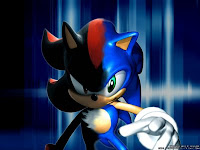 Some people seem to enjoy Sonic and company as characters, and show an interest in what happens in the plotlines. I'm pretty sure this is just a byproduct of their apologism, since this world was founded on the simple lie that Sonic somehow has "attitude". It rarely occurs to people that Knuckles was added to be an edgier character, and that when that didn't work Sonic's Shadow counterpart was added to the mix. When he wasn't enough, Shadow was given a dark version as well. Now Sonic has a dark side at night. The entire setting, plot, and characters of Sonic the Hedgehog are a series of attempts to out-dark the last one. Even nostalgia for childhood cartoons can't justify staying on this sinking ship.

The truth is that, speed aside, there was never anything fundamentally different about Sonic as a game. He runs, he jumps, and sometimes he gets special abilities (most of which, you'll note, have little or nothing to do with going fast). What made the games stand out so much on the Genesis was that the levels were absolutely spectacularly designed. Sections of the game seemed to play themselves, but at any point the player could break away and use the game's physics to launch off to another path through the level. This was more than just branching or separate paths, it was a level full of ways to move forward and a player empowered to find a way among them at any time. It was fast because you were always playing, not because Sonic was moving quickly.

I'm going to go ahead say that I don't think we need Sonic the Hedgehog, even in good games. What lessons about level design we can learn from the old games should be learned and we should move on to new franchises. I don't mean Sonic Team, since they obviously don't care about anything but their own bad ideas. I mean us. Stop hoping the next Sonic game won't suck. Stop even knowing when it's going to come out! Let yourself look back on it with a smile as that awesome series on Genesis with the simple, goofy setting and great levels.
Article Permalink
Older Post Newer Post