Posted on Saturday, April 12, 2014
Labels: Angst , Castlevania , Dark Souls , Death , Ethics , games as art , hope , What is a man?
So I last wrote about the problems that go with using zombies as the object of violence in a video game.  I was hyperbolic and self-righteous, but there's nothing in there I would want to take back, short of pointing you to some of the more recent research into the Kitty Genovese case that shows I maybe should not have used it as an example.  All the same, I'd like to talk now about one of very few games that actually does something interesting with zombies and undeath: Dark Souls.

The undead of Dark Souls are essentially ordinary people, but afflicted with a curse that gradually eats away at their memories of home and self.  The game is set in and around an asylum where the undead are sent in hopes of preventing the curse's spread.  Their ultimate fate is a violent madness, such that other undead serve as the game's foes as well as merchants and allies.  By far the most important thing about undeath in Dark Souls, however, is that it represents a real-world affliction that the game gives genuinely sweet and sincere perspective on: dementia. 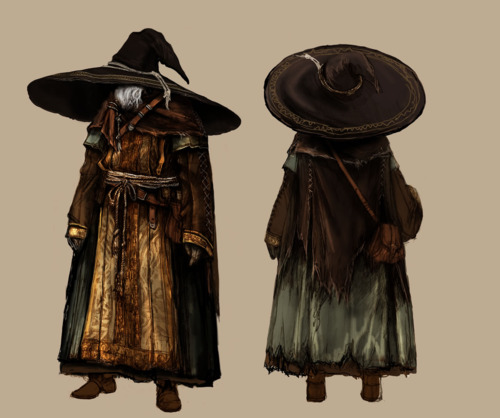 There are two storylines in the first Dark Souls that I'd like to highlight.  Anyone who plans on playing the game should probably stop reading, since I'm going to spoil the ways one's interactions with these characters unfold.  While these aren't story spoilers in the usual sense, they're a part of why Dark Souls is a brilliant and challenging game and I recommend letting the game reveal itself to you naturally.

The first character on the list is Big Hat Logan, a ravenous scholar who has ditched his apprentice and keeps getting himself captured:


Initial meeting:
Mm, you seem quite lucid! A rare thing in these times.
I am Logan. I'm a bit cooped up, as you can see.
I have a bright idea. Suppose you set me free?
I'm old and empty-handed, but i could repay you with my knowledge, and sorcery.
This place is melting my mind. The inactivity is repressive!

In the Duke's Archives, after rescuing him:
A great pool of knowledge, the fruits of superior wisdom and an unquenchable desire for truth.
Some would say Seath had an unsound fixation …But his work is a beautiful, invaluable resource.
All progress demands sacrifice.
And I certainly bear no antipathy for that wonderful scaleless beast.

After defeating the area boss in the Duke's Archives:
Oh, there you are, it has been a while.
Or were you just here?
This fascinating place defeats my sense of time…

Later still:
…Who are you…
…Stay clear…stay clear of my work…
…Curses upon you!
…How dare you disturb me!


After this you find his clothes in a heap, and if you search carefully you'll find him in another area of the archives running around naked.  He attacks you on sight, wild and paranoid.  The player has witnessed Logan's decline from celebrated intellectual to babbling fool, and there is no "good path" to take with Logan to prevent this fate.  It's a sad perspective on the fragility of intellect, where we witness perhaps the heaviest fall from greatness in the game.

But for me the most poignant story in Dark Souls will always be that of Siegmeyer of Catarina and his daughter, Sieglinde.  It's always been a heartbreaker, but when I sat down to write about it I realized it was even sadder and far more real than I had thought.  Siegmeyer is an undead adventurer.  He's friendly and good-natured, but not really up to the task of scurrying around Lordran getting into scrapes.  Time and again the player helps him out of a bind, and eventually comes across his daughter.  She's not undead, but she's come to Lordran to track him down and make sure he spends his remaining time comfortably instead of being a burden on others and getting into trouble.

Sieglinde is just as sweet and kind-hearted as her father, but when the player eventually comes across their reunion it's the aftermath of his inevitable decline: he has gone hollow, and it was up to her to put him down:

My father…all Hollow now…has been subdued. He will cause no more trouble.
It's finally over…I will return to Catarina.
You assisted us both greatly. I can hardly return the favour.
Oh, father…dear father…
Sob…


Rather than leave him to his fate in the Undead Asylum, Sieglinde sought to look after her father herself.  When the time came for him, it was left to her to pull the plug.  This is the scene that rewards the player for helping Siegmeyer through all of his difficult troubles, and it's representative of the tone of Dark Souls in general.

Dark Souls 2 made a tiny change that drives these themes even further.  Instead of being called "Humanity", the item that returns the player to full human status is called a "Human Effigy".  Upon creating a new character, the player is not prompted to decide the character's appearance or background until Strowen the firekeeper bestows one of these, saying it is a doll made in the image of a famous adventurer.  She then says it is the player's image, and this is when appearance and background are decided.  The doll is in fact completely vague in appearance, but the act of trying to make it out as one's self allows one to recall one's own self by trying to project it on the effigy.  Instead of a magic soul item, it's a definite focus for "getting it together" and recovering one's sense of self.


A few years ago my father was diagnosed with vascular dementia.  It's been a long and gradual decline, full of worry and crisis and hard decisions.  The worst thing about it is that whatever hard decisions you make, and however correctly you make them, the result is the same.  The best you can sometimes hope for is to make him comfortable for a very slightly slower decline.  Most players won't even realize it, but Dark Souls forces these kinds of decisions.  At the end of the game it's up to you whether to prolong a misguided and exploitative source of warmth and life for a little bit longer or plunge the world into an age of darkness.  Fans still can't agree much on which is the "good ending", because there isn't one.


Ultimately, Dark Souls is far kinder to the player than it is to its characters and world.  Advertisements for Dark Souls 2 proclaim that it's not about death, but life and learning.  This is an optimistic spin, but not untrue.  As with all stories that dwell on themes of the inevitability of death, Dark Souls teaches us to hold on to what we love and make the most of our time.  It also brazenly confronts the fact that not all of us live out our days as ourselves, and sometimes we lose those things we cherish before our time really comes.