Supple Think: It’s “Casting a shadow upon my floor”

It’s “Casting a shadow upon my floor” 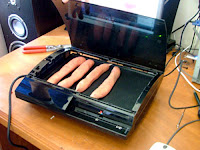 Ok, it’s not mine; it belongs to my brother. But it sits next to my Wii in our living room, hooked up to the HDtv, looming over the diminutive Wii like the Monolith from Auther C. Clarke’s famous novel. The conversations I’ve had with people about having it in my house are far more fun and interesting than actually playing it. Hold on, lets get the clichés out of the way. . .

It’s hard to describe the response people have when they see the George Forman Grill in my living room. My knee jerk response that it belongs to my brother doesn’t quell their ire, I usually have to explain the situation that led to the Grills arrival. My brother got it for $250 and some old car stereo equipment. Even with that explanation, most people still curl their lips and roll their eyes, I can see it written on their faces: “What a rip-off.”

I often liken Sony’s Folly to "The Raven" of Poe.

“But the raven, sitting lonely on the placid bust, spoke only,
That one word, as if his soul in that one word he did outpour.
Nothing further then he uttered - not a feather then he fluttered -
Till I scarcely more than muttered `Other friends have flown before -
On the morrow will he leave me, as my hopes have flown before.'
Then the bird said, `Nevermore.' “

I honestly think this every time I see that damned thing sitting next to my TV gathering dust. A proverbial albatross around my neck, placed there for some past mistake that I cannot remember. . . 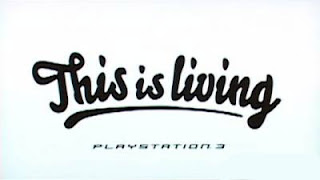 I’ll level with you, I’ve lost interest in writing this. I care so little about the PS3 that I can’t even be bothered to keep making fun of it.

“. . . And his eyes have all the seeming of a demon’s that is dreaming,” I fear the PS3's curse shall be lifted -nevermore.