The Speed Runner's School of Game Design -- The Circumspect, Heedful Everydayness of Metroid

Posted on Tuesday, October 16, 2007
Labels: Grand Theft Auto , Heedful Circumspection , History , Metroid , Nonlinear , Philosophy , Punishment , Sandbox , SDA , Speed Runs , Xenogears
In the previous entry on this subject I mentioned playing fair as a quality common to all games that are speed-run-friendly, and this refers to possibly the most important aspect of game design: heedful circumspection (you must have seen this coming). This bombastic philosophical term refers to the way a person uses the tools and abilities available to pursue a goal. A game that is conducive to speed runs, a game like Super Metroid, is designed as possibilities; a player will at any given time be expected to have certain tools or abilities, and the levels will be designed according to what abilities the developers intend for them to have. This is "playing fair" because a deal exists between player and game: the player has abilities, and the game provides obstacles with these in mind. If the player somehow "outwits" the intended path and uses his or her abilities in a new or inventive way, a game that plays fair does not invoke some deus ex machina to prevent this unintended progress.
Obviously this design philosophy has to be used carefully. If the game is not well crafted, game-breaking exploits may emerge, a terrifying possibility that has led many a developer to carefully wrap each layer of a game in layers of safe, reliable limitation. The more this is done, the more the game environment and abilities reveal themselves to the player as obstacles rather than useful things at hand. This notion is by no means unique to speed running, but it's never been more apparent than in the actions of a skilled player running an artfully made game. 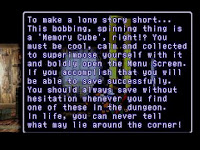 Another scourge of speed runs that hurts everyone is the forced delay. The freakish impulse to speed run every game ever made was savagely put down by the realization that a run of Xenogears would have seven hours of dialogue alone. I'm not making fun of the game for being wordy here (I'm in no position to, frankly), but rather for being unstoppably wordy. Four-thousand pages of shallow symbolism and mind-grindingly inane plot twists (spoiler alert: soylent green is people) are no problem as long as the text moves by at a good clip, but as in many games there is no control given to the player as the exposition grinds its way across the screen. I'm not just going out of my way to bash Xenogears here, either, since some of my favorite games ever are guilty of this--any Zelda game ever made has been full of slow text you can do nothing about, and I can't even count how many RPGs have had sluggish menus that make you wait for every input to register. A lot of thought goes into game flow, but at no point can I understand why it would be necessary to display text letter by letter rather than all at once, and when the majority of the notes on a speed run are there to describe the finely-tuned method of skipping text you know there's something very, very wrong. Voice acting has only aggravated this problem, as there are usually three second pauses between each line that make things take even longer than ever. Once again, an obstacle to speed running presents itself as an obstacle to casual, everyday play of the game.
The last aspect of a good speed run game is a touchy one--randomization. It's the hallmark of every RPG, and to a certain extent is necessary to keep a game experience fresh. It's also a case where speed runs can highlight problems with a game, but aren't necessarily the guide for how things ought to flow. Grand Theft Auto 3 is a perfect example of this: often, some random and inescapable event complicates the mission you're currently playing. This can be game-breakingly frustrating when a random event simply makes you lose the mission outright, but when these complications force you to adapt to emerging situations, letting you discover the power you have to make things work out in your favor, the game shines gloriously. Neither case is particularly good for a speed run, but the lesson they can teach us is there in the former. 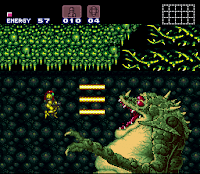 A great example is Yakuza in Metroid Fusion. This boss fight is the bane of every speed runner's existence, and anyone who plays the game will feel their pain: Yakuza jumps around the room randomly until chance works in your favor and the game deigns to present his sole weak point. Most boss fights work on the mechanic of revealing a weak point, but ideally it is up to the player to coax it out, not the game. The beauty of fighting Kraid in Super Metroid is washed away when suddenly instead of forcing his mouth open you're waiting for it to open. These moments pull the player out of the situation, replacing challenge with frustration.
Ultimately, the lesson to be learned from speed running is that the video game should be placed in the hands of the person playing it. For a medium whose defining aspect is interactivity, an alarming amount of game design these days seems to be carefully and meticulously obtuse, restrictive, or downright punitive. Games work best when they reward experimentation, and there are few better places to see the best and worst of this the medium has to offer than in the ultimate forum for experimentation: speed runs.
Article Permalink
Older Post Newer Post