I’ve got a surprise for you. You’ll never guess what’s getting ported to the PSP. . . Umihara Kawase!

Hey, why are you walking away! This is really cool! I know it’s anime, but it’s not crap. . . I promise.

Gamecenter CX has been discussed previously on this blog, but the article failed to mention how the show can raise a persons interest in titles that they may never have heard of before. This happened to me with Umihara Kawase.

Umihara Kawase shares game mechanics with Solomon’s Key and Bionic Commando. The player must navigate a series of enemy filled puzzles to reach the goal by using a bungie cord to fling themselves across gaps and defeat enemies. The game is quite impressive to watch and play, with branching paths that increase replay value and level design that may cause you to have an embolism.

The setting of the game is truly strange, a small, cute Japanese school girl must face hoards of sea creatures that have mutated (and grown human legs in some cases). The game’s artwork is detailed but the sprites have only have a handful of different animations, the backgrounds consist of low resolution photographs that’ve had their color palate reduced to make them look even more grainy. When looked at as a cohesive whole, the graphics of Umihara Kawase are not impressive, and screen grabs make the game look like countless other platformers of the era.

What makes the game incredible and fun is the bungie physics and puzzle game play. Seeing the game in motion makes its appeal instantly obvious; Leaping from ledge to ledge as quickly as possible to not only avoid running out the clock must be balanced with level exploration to make sure that you’re not missing an alternate exit. The game's good points far outweigh it's bad points. 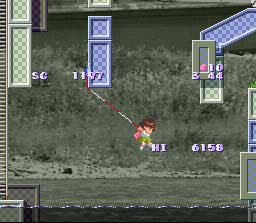 I recently discussed this game with fellow supple thinker Zen and he alerted me to the huge speed running community surrounding this game. Apparently the tool assisted runs are mind blowing.

Unfortunately Umihara Kawase was never released outside Japan, so most people have been forced to play it on an emulator. Piracy issues aside, it feels awkward because the imperfect nature of emulation screws up the timing for some of the jumps and makes the bungie cord physics faster and less smooth than they are on a real Super Famicom.

Lucky for us, there is no region hardware lockout on PSP games, so we’ll be able to play the PSP version that comes out in 2008. It’s not a port of the Super Famicom game, but rather the Playstation sequel Umihara Kawase Shun (example). The games are essentially the same, the Playstation version has less bungie slowdown and a vastly improved color palette. While I am excited about finally being able to play this game properly, I am worried that this game will not be brought out in the US. Puzzle/Exploration games are popular in the US, games like Exit and Loco Roco sold well. I feel that the weirdness of the game and entirely 2d nature of the game may kill the games chances. Let’s cross our fingers for a 2008 US release of this, along with Yuusha no Kuse ni Namaikida. Article Permalink
Older Post Newer Post