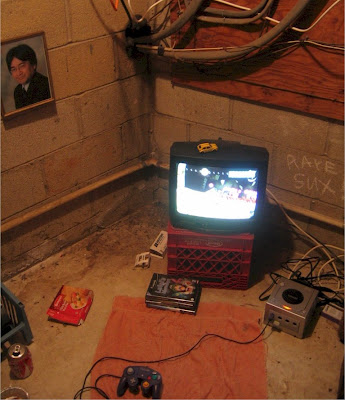 I have a copy of smash 3, and it really embarrasses me. Not only do I feel that I’ve betrayed some sacred trust by buying it I can feel it’s horrible nostalgia beam slicing to my core and waking the animalistic consumer beast lying dormant in the recesses of my brain. The lumbering beast speaks in a guttural tone not unlike the mingled mumblings of a thousand neckbeards; urging me to spend absurd amounts of money on hard-to-find games that feature the participants of the incestuous pantheon known as Super Smash Brothers: Brawl.

One side effect of acquiring SMABURA is a renewed use of my Wavebird, which has not seen regular use since the summer of ’05 when Nanohana and I helped Leon S. Kennedy rescue a girl with huge monkey ears.

While looking at my rarely used Gamecube I looked back at my meager collection of games and spent some time ruminating about why this was such a neglected console in my house. The final game I bought for it was Odama, and in all I only purchased seven games. I won’t waste space detailing the short-comings of the ‘cube, instead I’ll simply say some positive things about it.

In hindsight, these are some of the things that stand out to me. The controller design is a welcome departure that I still appreciate today, I love it’s funky look and how it comfortably fits in my hands. The large central green “A” button flanked by a smaller red “B” button and two grey “X” & “Y” buttons makes more sense than most people are willing to admit for several genres of games. Some of the games that I found to be an absolute joy and never stopped being fun were: Resident Evil 4, Viewtiful Joe, Odama, Metroid Prime and Zelda: The Wind Waker.

While using my old Wavebird for the newest Nintendo party game on Wii, I chuckle slightly as I remember all the good times I’ve had with it fucking with my co-players in Super Monkey Ball by switching comm. channels to control my opponents characters. Using the Wavebird also makes me feel slightly hollow inside, almost like I’ve betrayed someone.

Then I remember that Nintendo hates me and will never give me Earthbound. If I ever want to play some weird rare Nintendo game they’re as close as the nearest computer with a internet connection.