Supple Think: A Man Once Dreamt that He Was a Rock

A Man Once Dreamt that He Was a Rock 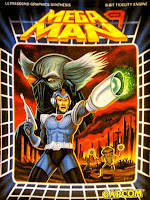 I'll confess I've never been as up on the Mega Man phenomenon as I should have been. Growing up I got to play the original, but not enough to get good at it. At home the only gaming device I was allowed was my Game Boy, so I made do with a couple of the Game Boy titles until I could use an emulator.
Technically I've played through and beaten the first seven games in the series, but since I did it with an emulator I cheated like mad and never got very good at them. The first Mega Man on Game Boy, however, remains my bitch to this day; I can maul through it with my eyes closed from start to finish.

Despite my metered exposure, having played almost the entire franchise I can say with some certainly that Mega Man 9 is the best entry by far. I would not have said anything of the sort during my first few hours of gameplay, what with the constant falling and exploding and losing, but after skating through the game once on energy tanks and picking it up again something crazy happened: I declared my lordship over it.

Every obstacle in the entire game is an obstacle only until you make sense of it. There's a rhythm to every area in Mega Man 9, and once you get into it you'll find yourself stopping very rarely. Areas that seemed arduous at first become second-nature, and weapons that seemed useless become favorite tools.

That's something about Mega Man 9 that we haven't seen in a long time: useful weapons. This is the single biggest factor in Mega Man 2's greatness, where the Metal Blade achieved legendary status for its versatility, power, and forgiving use of ammunition. The unfortunate side effect in Mega Man 2 was that it was practically compulsory for you to take on Metal Man first in a game that should be all about leaving it up to the player. Mega Man 9 sidesteps this by having every weapon possess genuine utility. Even the tired rotating shield weapon doubles as Enker's Mirror Shield, and the fire weapon is more useful for its angle of attack than for any extra damage it does or the fact that you can charge it.

A fundamental fact of a good Mega Man game is that the weapons you receive don't affect how much damage you do so much as they affect how you play the game. Another one is that playing the levels in a different order should be a very different experience. Mega Man games are even more nonlinear than the old Metroid games, it's just that that nonlinearity is completely on the table from the beginning. You acquire the tools in the order you want, and rather than deciding whether you can pass through an area, acquring a new tool merely decides how you can pass through that area.

The result, in Mega Man 9, is a playground. You are given obstacles, and you are given a bunch of tools. Anything will work, so it's just up to you to figure out what you want to use. It gets written up in my book along with Final Fantasy Tactics, Super Metroid, and Mario Sunshine as a shining example of nonlinear game and level design. If I could, I would make out with it every day.
Article Permalink
Older Post Newer Post