Supple Think: This Game has a Japanese Title

This Game has a Japanese Title 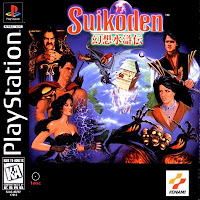 Hey, is it cool if I shit all over this thing you love? Okay, thanks.
Ever since I played them back in college, I've wondered how anybody could possibly hold Suikoden I and/or II in such high regard. Like Final Fantasy V before them, the games are clearly beloved only because they feel so secret and valuable to US gamers. Saying Suikoden is your favorite game will make everyone stroke their beards and grunt appreciatively in your Philosophy East/West class. Suikoden II is an especially safe bet, since anybody who played the first game is unlikely to have stuck around for the sequel, so if they're not quite sure what you're on about they'll probably keep it to themselves.
It's pretty hard to objectively demonstrate that a game is garbage, but it's easy enough to argue against what people love about it. I think Suikoden is a lot like Xenogears in how much its ambition is completely wasted by sloppy, hamfisted execution, and the fans of both series are always so impressed by the former that they completely ignore the latter. Sooner or later, though, the fans start to wake up a little bit. For Xenogears fans it was Xenosaga that started them thinking, and Suikoden fans have Suikoden III and IV. 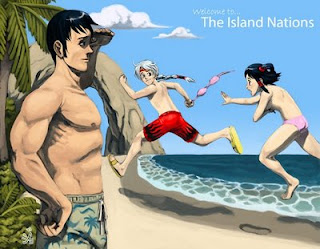 Suikoden III and IV are exactly like Suikoden I and II. I haven't played them, so I'm basing this purely on what I've read about them on the Internet: that their characters' interactions are contrived and nonsensical, that the story is shallow and undeveloped, that the villains are set up as pure world-destroying evil in a series that's supposed to be all about moral grey areas, that the gameplay and pacing are clunky and time-consuming, that the 108-character feature doesn't mesh with the combat system, and that the strategy game-like tactical battles are a completely worthless afterthought.
It's unfair for me to prejudge Suikoden III and IV based on Internet forums, but the point I'm trying to make is that the problems Suikoden fans have with the third and fourth games in the series are the exact same problems I had with the first two. Maybe they really are inferior games, but it looks to me like all they did was force series fans to confront the flaws in a deeply flawed series of games.
Suikoden hasn't just aged badly--there is actually no reason whatsoever to play the games today. A lot of games that aren't much fun anymore are at least historically interesting, doing something to advance the medium or offering a take on a genre not seen before or since. Suikoden's legacy is the mechanic that ruined Chrono Cross and a bunch of SaGa mechanics that never worked. For every character making a decision in a world there were five stupid anime characters doing everything for no reason. For every time the game reminded you that there was no right side or wrong side in the story there were five scenes demonizing the villain. For every attempt at moral inquiry the game decided to remind you five times that racism is bad.
Suikoden is not profound, influential, or even very much fun to play. Its importance in the medium is only to shine a light on those who value games first and foremost by their rarity. Leave it be and move along. 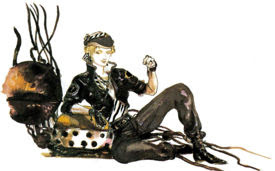 If that's not pretentious enough for you, try this out: if Suikoden were a philosopher, it would be John Locke. Both are trite codifications of the shallow biases and habits of their ages with nothing novel or penetrating to contribute. Congratulations, Suikoden! You are the ass pit 'twixt the cheeks of Descartes and Berkeley!
Article Permalink
Older Post Newer Post