Supple Think: Beyond the Sea 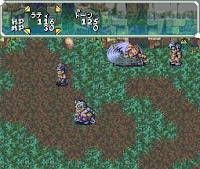 Holy crap, it's a Star Ocean renaissance! I just bought Star Ocean! Not the old FF7 ripoff that turned out to be awesomer than it had any right to be, or the new one from a couple years back that dripped diaper gravy all over its legacy, but the original Super Nintendo classic that, along with Tales of Phantasia and Seiken Densetsu 3, represent the peak of the old girl's technical prowess. The SNES version of the game was so awkwardly crammed into a cartridge, with zany data compression, some voice acting(!), and a somewhat unfinished-feeling campaign. It felt a lot like a planar version of Tales of Phantasia's linear combat, but at the end of the day that's not what distinguishes it.
If you've ever played any of the fifteen brazillion versions of Final Fantasy (that's Number One I'm talking about), you may have noticed that it had a lot of unique items and side quests that did more than just add to numbers on your stats window. This is mostly due to its proximity to the old pen and paper RPGs, and even their early computerized imitators. It was trying to give a sense of complexity, maintain some pretense of roleplay even though most of it was a farce (hell, most of the spells didn't actually even do a God damned thing). Even though it wasn't doing much, this level of imagination contributed to the sense of adventure in ways rarely recaptured nowadays.

Star Ocean is mostly your typical JRPG, but it deviates from the norm in ways both good and bad. The bad first: if you don't like missing things in your RPGs, like really useful items and characters, you should either stay away from the series entirely or always use a walkthrough. Star Ocean, and in particular its sequel, are infamous for making you regret things that seemed innocuous when you did them.

The good stuff is mostly the things you can miss or not notice. Part of what makes Star Ocean games great for me is the skill system. Instead of just combat skills or thieving skills or... cliches from that one movie, it gives a list of very general and mundane skills you can develop as your characters' numbers go up. Things like "Eye for Detail" and "Sketching". Sometimes they'll have immediate reward, like stat boosts, but other times they'll unlock abilities, like making artwork to sell or publishing books that can teach skills to other characters. Some of these abilities are necessary to get the best stuff in the game. Most of this is impossible for any player to know on his or her first time through. 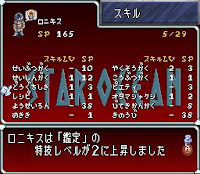 Even though at the end of the day you just max out the important skills for everyone, you get to have some fun working it so that each character has a specialty. Maybe JRPG Character Archetype #2 is really good at composing music, Archetype #7 is your best pickpocket, Archetype #5 is learning to paint, and the whole group together has a pretty good orchestra and is learning to cook. They have varying reward in terms of the game system, but they're a handy aid to imagination and go a long way toward breaking up the monotony of the otherwise traditional gameplay.

Everything else about the games is completely standard. Their stories work well enough, their settings are sometimes irritating and sometimes just fine, and the music is actually kind of excellent its own quirky way. They're completely unapologetic, and worth experiencing. That said, I can only recommend buying these games, and their remakes, if you're really fond of their particular eras. The first came out at the end of the SNES days, and its remake and sequel (and its remake) are classic PS1 look and feel. Just don't miss out on that Eternal Sphere or you'll be so mad you'll stop playing.

If Star Ocean were a philosopher, it would be Hegel. Both understood that things had changed and how, and in attempting to make it all work together and synthesize everything that came before they managed to achieve no small degree of halfway-impressive mediocrity. Neither really works alone, but taken in terms of their places in history either can be enjoyed on its own terms. Also, bringing up either is a great way to end a conversation.
Article Permalink
Older Post Newer Post