Supple Think: WE ARE ALL FUCKED

WE ARE ALL FUCKED 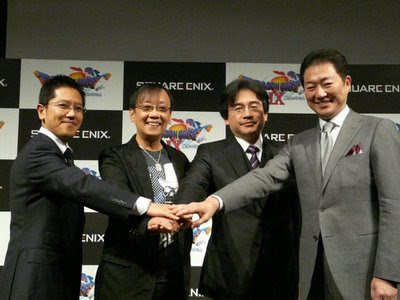 In case you're confused, here's the situation: Square-Enix, the most powerful Japanese software developer, have just announced that they are releasing Dragon Quests IX and X, the next two entries in the most powerful game franchise of all time, for the DS and Wii, the juggernaut Nintendo systems that just may be the most successful in the history of the medium. In the photo are, from left to right, Some Guy, Dragon Quest series producer and accomplished Elton John impersonator Yuji Horii, Nintendo president Satoru Iwata, and Square-Enix president Yoichi Wada.

What is happening here is equivalent to every country in the world giving the USA all of their nuclear bombs at once. This is the kind of market domination only James Bond villains are capable of. What you should notice when you look at this picture is that Satoru Iwata, the man holding all the strings, is not into it at all.

When an event of this magnitude is treated with such ennui one can only conclude that in appointing Iwata as his successor Hiroshi Yamauchi actually breathed a part of his spirit into the young executive. I look forward to watching him grow more callous and haggard over the coming years, gaining less and less pleasure from his successes as he begins to resemble the powers that created him.
Article Permalink
Older Post Newer Post