Every once in a while somebody who makes games will tell a story or explain a decision in a way that is really jarring and thought-provoking. The obvious example is Miyamoto's story about the origins of The Legend of Zelda. Even more primal than Miyamoto's childhood adventuring, though, is the anecdote itself: romantic and inspirational, reminding us that there are reasons games are fun and that it might be possible to understand what they are on some level. The problem is that only rarely does this kind of personality shine through in a game on its own, and the language barrier between us and Japanese developers keeps any explanation on the side either completely opaque or vastly leveled-down.

I'm going on about this because I just read this spectacular piece on game design, and it gives a great look into the workflow of game designers. One man's brief epistle, while restrained in scope, approaches the game in its complete character in a way marketing copy and third-party features and reviews are hard-pressed to. This has been on the rise of late because smaller, independent development teams not only thirst for direct contact with players, leading to more direct essays like this, but their small size brushes away all the dirt that covers over the personality of the people making the game. This has been talked about at length over the last few years as independent games have begun to thrive, but as video games have become more personal they have also necessarily, thrillingly, become more dialectic.

It's tempting, when writing a review of a game, to enframe it in terms of "difficulty", "music", "graphics", and "gameplay" (usually meaning the interface). None of these things necessarily has much to do with playing a game. They are attempts to objectively measure its quality, not to convey the things one feels while playing it. The result is that most such reviews set out to tell you nothing at all that you need to know, and only accidentally and ambiently convey some notion of what the reviewer's experience of the game really was. Saying that GOD HAND is "too hard" is a troubling proposition. On the one hand, GOD HAND is incredibly hard. On the other hand, its difficulty is so masterfully paced that with the proper introduction it pulls you forward like a conveyor belt. Reviewers of Devil May Cry 3 were infamously humbled by the first levels of the game's original US release, to the point of dismissing the game entirely. Both of these examples show games whose reviewers are so consumed by the need to objectify the game that they have a hard time simply experiencing it.

Any game can be challenging, and this challenge can help or hinder it. Just as an older game's graphics can be technically inferior but factically far more expressive than a more recent one, a game that is easier to beat might be far more difficult to play well. Most of us have a list of things we hate to see used to add challenge, and yet we have sometimes enjoyed games despite these things. I am inclined to agree with Hiroshi Shibata that one way for a game's challenge to "work" is for it to force the player to confront and overcome fear. More than just a series of command inputs, a game takes place in terms of its presentation. A game can be challenging without making the player lose, as the fear of losing is only one kind of fear the player of a video game confronts (as anyone who's played La Mulana will attest). Shibata's essay brought to mind Heidegger's characterization of "what is encountered in fearing": 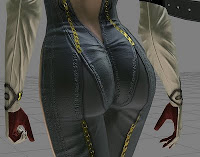 1. What is encountered has the relevant nature of harmfulness. It shows itself in a context of relevance.
2. Thus harmfulness aims at a definite range of what can be affected by it. So determined, it comes from a definite region.
3. The region itself and what comes from it is known as something which is "uncanny."
4. As something threatening, what is harmful is not yet near enough to be dealt with, but it is coming near. As it approaches, harmfulness radiates and thus has the character of threatening.
5. This approaching occurs within nearness. Something may be harmful in the highest degree and may even be constantly coming nearer but if it is still far off it remains veiled in its fearsome nature. As something approaching in nearness, however, what is harmful is threatening, it can get us, and yet perhaps not. In approaching, this "it can and yet in the end may not" gets worse. It is fearsome, we say.
6. This means that what is harmful, approaching near, bears the revealed possibility of not happening and passing us by. This does not lessen or extinguish fearing, but enhances it.
[Being and Time p.140]

There's a lot of Heidegger jargon in there, but I'm sure you can see how this list reads almost like a map of an action game's boss fight. Typically one thinks of the phases of a boss fight in terms of its attacks, patterns, and tells, but the designer must put it together in more primordial terms. What this reveals is a more existential way of looking at video games in general. Facing off against a boss for the first time is always more terrifying than when you come back to it, not simply because of its dramatic presentation but because it places the player in an environment that is unfamiliar, "uncanny". The player's own imagination of what harm this opponent can inflict is even more terrifying than the actual "damage output".

Existentialism in novels and films has led to a great deal of snobbery and competition over who's the biggest artist. It's comforting to see that in video games we have the possibility to employ the ideas in a way that's less referential and more applied. Video games are existential always already in that they must involve the player in an experience. A game that seeks to limit the player's experiences to a script is missing this critical point. I've talked before about how good games empower players, but that's probably the wrong way to put it. A good video game puts the player in a world in a way fundamentally different from mere storytelling. A good video game opens up a world of decision making and possibility, gives the player a chance at pursuing a project.

Sandbox games, nonlinear games, storytelling games, puzzle games, fighting games, every single genre of video game does or doesn't do this at various points, and I think it's important to change the language we're accustomed to using when talking about these successes and failures. We live in a time when game designers can perform, can put players in a world like never before. It's time to stop waiting for video games to be the same things as books and movies. We're well beyond that now, well beyond the script and the recording and the measured span of time. Video games found their way years ago, with almost nobody noticing and even fewer taking the lead.
Article Permalink
Older Post Newer Post