Posted on Sunday, August 23, 2009
Labels: Derrida , Ethics , games as art , Heidegger , Hideo Kojima , import , Japan , Metal Gear , Philosophy , Rorty , What is a man?
Building on my previous post about game designers as the new existentialists, I found these words by Rorty rather stirring:

... deconstruction ... needs a clear distinction between philosophy and literature. For the kind of reading which has come to be called "deconstructionist" requires two different straight persons: a macho professional philosopher who is insulted by the suggestion that he has submitted to a textual exigency, and a naive producer of literature whose jaw drops when she learns that her work has been suppported by philosophical oppositions. The philosopher had thought of himself as speaking a sparse, pure, transparent language. The poetess shyly hoped that her unmediated woodnotes might please. Both reel back in horror when the deconstructionist reveals that each has been making use of complex idioms to which the other has contributed. Both go all to pieces at this news. A wild disorder overtakes their words. Their whimpers blend into interminable androgynous keening. Once again, deconstructionist intervention has produced a splendidly diffuse irresolution.

There is something suspiciously old-fashioned about this way of setting up one's subjects. It is a long time since we have had writers who considered themselves in the business of providing pleasure. ... [Essays on Heidegger and Others, p.86]

Many will tell you of the harm Derrida (inadvertently I think) caused to literary analysis, and that phenomenon is the specific target of that passage. Rorty was concerned with the assumptions Derrida's criticisms of philosophical thinking made about both fields, but this came on the heels of his own significant bias toward prose: 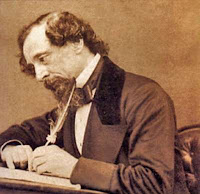 As a way of counteracting Heidegger and, more generally, the kind of post-Heideggerian thinking which refuses to see the West as a continuing adventure, I want to put forward Charles Dickens as a sort of anti-Heidegger. If [archaeologists of the future] were, for some reason, unable to preserve the works of both men, I should much prefer that they preserve Dickens's. For Dickens could help them grasp a complex of attitudes which was important to the West, and perhaps unique to the West, in a way that neither Heidegger nor any other philosopher could. The example of Dickens could help them think of the novel, and particularly the novel of moral protest, as the genre in which the West excelled. From this point of view, the interaction of West and East is better exemplified by the playing of Beethoven's Ninth Symphony by the students in Tienanmen Square than by the steel mills of Korea or the influence of Japanese prints on European painters of the nineteenth century. [Essays on Heidegger and Others, pp.67-68]

Heidegger famously elevated "the poetical" in his later years, and Rorty seems hellbent on elevating the morality play instead. Heidegger's distaste for Western metaphysics and its insistence on objective fact appears, to Rorty, to be a distaste for the considerable social and political strides that have been made in the West. This essay was published in 1991, and I would love for Rorty to have been able to draw on the considerable cross-pollenation of Eastern and Western game development instead of century-old paintings inspired by still older Japanese prints. That said, it makes little difference to his point: instead of trying to express some transcendent quality through poetry, one should instead concern oneself with tackling moral and social problems by connecting them with people, with characters.

Still, it's not as though there haven't been games that tried to address these issues within a narrative. Whatever you think of the results, there can be no denying that Hideo Kojima's impenetrable oeuvre makes various comments on (post-)modern lifestyles and political attitudes. I encourage anyone who plays his games to forgive the failure at achieving the impossible task of tying all his games together into a single narrative, and to those of us who started playing Metal Gear games at the outset his turn to the dissonant and absurd is jarring and sometimes revolting. In spite of all this, one can discern a few central threads that he's been struggling to follow to their conclusion, possibly without even realizing it.

You can disagree, and claim that Kojima has always been playing the philosopher/poetess game. People seem to think that he's always been courting some kind of recognition from the world of acknowledged intellectuals, or that he really still wants to be a film director. I say that he's failed spectacularly at both, to his benefit. I'm not one for Dickens, but what Rorty claims Dickens can accomplish is something that video games can accomplish tenfold. I don't think anybody can play a Kojima game without being bothered by him. Some people criticize the game, thinking they're bothered by it, but it's always Kojima. It's always Kojima making you look at what you're doing, what you're not doing, what you're ever doing. And he always considers himself to be in the business of providing pleasure.

Sometimes Kojima just seems to be a guy stuck in Metal Gear, but if you go back to his other work you'll find that Metal Gear is simply stuck in the broader narrative of Kojima himself. There's never been a better time to find this out, either: Policenauts, his legendary follow-up to Snatcher, has finally been translated by dedicated fans. I urge everyone to find out firsthand what Hideo Kojima has really been up to all these years.
Article Permalink
Older Post Newer Post