Supple Think: Sins of Our Fathers

Sins of Our Fathers

Posted on Friday, October 9, 2009
Labels: 2D , Castlevania , Chrono Trigger , Confessions , Death , Ethics , games as art , Heidegger , History , Japan , marx , neckbeard , New Games Journalism , owen wilson , Persona , Philosophy , Suikoden , What is a man?
As an avid reader of German philosophy, I so often find myself at the mercy of translators to properly understand the material. Even if I, like Heidegger, refuse to concern myself with fidelity to the philosopher's intent, a poor translation can obfuscate or even completely cover over useful nuances and enlightening tricks of meaning. This problem is as much present for novels and music as it is for philosophical works, and I've found it applies to video games as well. Masterpieces like 7th Saga, Final Fantasy V, Secret of Mana (Seiken Densetsu II), Chrono Trigger, and even parts of Final Fantasy VII suffered from having poor to nonexistent translations that hid their greatness from view.

Fortunately, Japanese publishers started to catch on that not everyone in the US is a drooling moron around the time the original PlayStation came out. Instead of dumbing down hard games and not even releasing games that were too complicated, Japan discovered that gamers in the US were thirsty for true works of art. For me, the turning point was a game called Castlevania: Symphony of the Night, and after the opening scene I knew things would never be the same again.

What follows is an annotation, a sort of recreation of my own thoughts as I relive these precious moments today. You are encouraged to click this YouTube link first, so that you can appreciate these lines as I first did all those years ago. 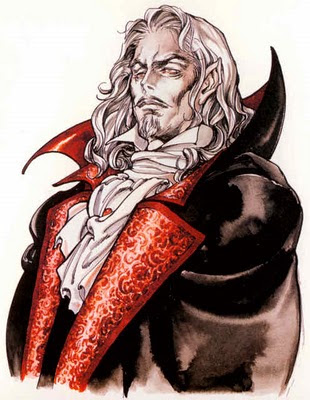 Richter: "Die, monster! You don't belong in this world!"

We see here a desperate and crucial line being drawn, a dualistic boundary with foundations in Plato that has, much like Dracula himself, endured (some might say thrived upon) the millennia of strife human beings call history. The irony foreshadowed here is that not only does Dracula belong, but this world is contingent on another dualism that he represents. He cannot be banished from this world, because without him there can be no world. Koji Igarashi is arguing here that one cannot banish value, cannot operate outside of it, and cannot simply eschew the uncomfortable and macabre. This becomes important later, but for now one can simply appreciate the claim that worldliness comes after value.

Dracula: "It is not by my hand that I am once again given flesh. I was called here by... humans who wish to pay me tribute."
Richter: "'Tribute'?! You steal men's souls, and make them your slaves!"
Dracula: "Perhaps the same could be said of all religions..."

This famous exchange at first seems to contradict Dracula's opposition to the value of Goodness, but he is not trying to equivocate. He is in fact highlighting his nature as the opposite, that he behaves the same but in the other direction. There is a note of sadness to be discovered here by the perceptive: there is no hate in this exchange, as though Dracula mourns the fact that his foe, whom he respects more than he can ever let on, could just as easily have been his most trusted ally and friend. The futility and contingency of it all throws the attentive player into an authentic experience, fully appreciative of the arbitrariness of the very distinction the series represents. This irony is one of the most compelling moments in video game history, and is possibly the main reason for the fondness so many gamers have for this title.

Richter: "Your words are as empty as your soul! Mankind ill needs a savior such as you!"
Dracula: "What is a man? A miserable little pile of secrets! But enough talk... have at you!"

Who knows what secrets lie hidden, deep within a man's heart? Does Dracula? Is it his lack of a soul which clouds the deepest truths of humanity from his vision? Or is it perhaps the very thing which allows him the keenest vision of all, a pure and objective view of humanity which is the source of his contempt? In this beautiful passage we see the heart of Castlevania's meaning, the foundation and culmination of all of its themes. Dracula--dangerous, powerful, timeless--displays a kind of insecurity. Unable to relate to anyone but his greatest foe, he is quick to dismiss the subject. Could he abandon his position, see if the world could survive without his chaotic influences? Best not to think about it. The last time he let himself see humans as anything more the results were too painful to bear. Best to end the discussion and do his duty. Best to go on forgetting, go on hating. It's the best for everybody.
What childhood could a man like this possibly provide? Is it even so different from the plight of any father quaking in the face of the insurmountable responsibility of parenthood? The roles of faith, love, fatherhood, and family legacy all collide here. In this brief encounter with Richter we seem to learn so little of Dracula, and yet one can see his entire person (dare one even suggest a soul?) laid bare in these few lines. It is only fitting that Richter sit the game out, having done his duty: the stage is set for Alucard (Is he his father's opposite? He goes in the other direction, but is made of the same stuff...) to discover his father, and himself. By the end of the game we see not only the purest of good, not only the most dastardly of evil, but the gentle, terrified man who sits precisely between them. And we see the horizon by which to judge him: the balance of all things.
Article Permalink
Older Post Newer Post