Still, sometimes being 2D doesn't have to be enough; sometimes Vanillaware makes a game. Now I've only played two of their games, but both have offered a distinctive perspective on action RPGs while delivering the most astonishing visuals I've possibly ever seen in a video game. Odin Sphere was a meticulous and harsh brawler, one where each chapter of its intricate story not only provided new perspective on seemingly clear events but also presented the player with completely new play styles. There was variety to the combat, and each playable character focused on a different aspect in a way that really explored the potential of this variety.
In short, it was a masterpiece, although in some ways having a score by Hitoshi Sakimoto could be considered cheating in this regard. When a Wii successor was announced I got pretty excited, since I seem to be the only person who still wants the Wii to work as a platform for more than Gamecube ports, opportunistic shovelware, and kusoge. After playing several hours of Muramasa: the Demon Blade, the 2D gamer in me feels sated without feeling cheapened or insulted.

Like Odin Sphere, Muramasa proves that sprites are still way, way more detailed and beautiful than 3D models. 3D effects are used for complex animations, especially for some of the more enormous sprites, but always as emphasis for actual frame animation. It's a distinctive visual style, somewhat reminiscent of Flash animation, this time given the same kind of Japanese art flavor as Okami. The colors are phenomenal, the backgrounds lively and deep, and the gameplay excellent.
Vanillaware action RPGs have a flow of gameplay that simplifies or removes some of the more traditional obstacles, like platforming challenges or fetch quests, and instead offers the same variety and depth of experience in just combat and map navigation. In Odin Sphere this was accomplished with parallel systems of food and weapon experience which fed into each other, along with a ridiculously complex item crafting system that was tied into every single aspect of combat and character progression. In Muramasa the item crafting is simpler, but there are still parallel systems affecting what weapons you use. This relative simplicity is made up for by a much more flexible combat system. Instead of cautiously performing hit and run tactics on swarms of durable enemies, combat happens in quick skirmishes that coerce you into using all your abilities without ever explicitly requiring it.
Basically, the theme for these games is that nothing is wasted. Every action you perform is working double-duty, and every action you perform provides toward a goal elsewhere. This is how a game that essentially boils down to running around a simple map fighting random battles can stay fresh and interesting for so long. 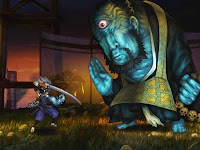 To explain more about why I love the game's combat so much, especially in the face of accusations that it's too button-mashy, I'm kind of a sucker for any combat engine that emphasizes mobility. There are simple ground and air combos if you just mash the attack button, but it's usually a better idea to take advantage of the dash attacks. You hold down the attack button and just aim the control stick in the direction you want to go. Combat feels more like a flow from one enemy to another, punctuated by stationary combos, than a simple round-up followed by an attack combo. Dodging and attacking become the same, and just like everything else in a Vanillaware game no single action serves a single purpose, but everything works double duty.
Another feature of the combat, and probably the primary reason people think it's too easy, is the blocking. For the most part (things change in the game's hard mode) you block by attacking while being attacked, which makes sense as far as parries are concerned. The reason this all works is that blocking uses up sword integrity, which is necessary for performing special moves. After a sword breaks it will slowly regenerate, and you can carry up to three at a time, but for the most part you will be more worried about keeping your swords intact than actually taking any damage. Once they all break you're basically dead meat. Think of it like the recharging shields in any post-Halo shooter, only because it's Vanillaware they pull double duty and power special moves, too.
Muramasa has two difficulties, which boil down to Baby and Insane. It's probably better to acquaint yourself with it before going insane, but you can switch at any time. I've found a fair bit of challenge as a baby without wanting to pull my hair out, but I'm looking forward to replaying it on hard mode. I would probably have preferred a GOD HAND-style reactive difficulty system, but that's not Havok Physics ubiquitous yet, so I can't really complain.

The game is brilliant and the game is beautiful, but that's not even why I love it, exactly. It's the same sort of feeling I got when I played No More Heroes and felt like I really got to know Suda 51. We're all used to loading up a game and seeing corporate logos for thirty seconds, but you don't even see Vanillaware's logo until after you press Start. It's a unique touch, and it reminds me every time that the people who made the game are a part of the game experience itself. When the cover falls off of House of Leaves you're left with a book written by characters, and it's the author's hope that you forget about him entirely. If the cover fell off of Muramasa you'd still be spending time with George Kamitani, because he puts so much of himself into what he does. Please join me in loving him for it.
Article Permalink
Older Post Newer Post