Posted on Thursday, September 8, 2011
Labels: developers , games as art , hope , Jenova Chen , Levinas , money , Philosophy , PStriple , What is a man?
Several months ago the National Endowment for the Arts announced that it would be expanding its definition of art to include video games. There was a lot of predictable confusion about what this meant, but now that the storm has subsided I'd like to take a look at some of the truly positive things we might see as a result of this. 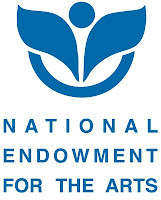 The fact that it's now possible for authors of video games to receive federal grant money has fascinating possibilities, not least of which is the divorce of game development from the corporate bottom line. NEA grants are available only to non-profit organizations, which means more or less that money is available only to authors more interested in making games than in making money. The paradigm of the starving artist has been missing from video games, instead represented by the risk-taking entrepeneur. When you hear "video game exhibition" you think of a trade show like E3 instead of an art exhibition. And while I believe it should be possible for artists of any sort to make some proper money doing what they love, the only way to keep it from staying merely a business venture is to make it somewhat impractical.

Thus far we've seen publishers trying to fill a double role. A field like video games can only advance if boundaries get pushed, and companies need this advancement to compete. This is why Namco has anything like a Digital Hollywood Game Laboratory, and why they would give Keita Takahashi a million dollars to "proactively ignore" corporate marketing instincts and make a game like Katamari Damacy. But that story more resembles a gifted engineer producing an inventive patent from the lower levels of a company than an artist setting up a work of art within or against a particular culture. It's unheard of for the artists to not intersect with the industry, but that intersection has at least managed to change in recent years.

This change has enabled small companies to get their games released on a global scale without signing all of their intellectual property over to the publisher. This appears to be the arrangement that Jenova Chen (né Xinghan Chen) has with Sony, who have contracted him for three games to appear on the Playstation 3, two of which (Flow and Flower) have been released already. Chen has repeatedly shown a willingness and desire to give up the easy, profitable path for more artistically fulfilling work. He co-founded a company called Thatgamecompany (TGC), which he indends to keep small and personal, and he gave up a secure position at Maxis to do so. They've apparently made action games that follow traditional formulae internally, and these games were allegedly quite promising, but Chen says he decided not to spend his time on anything that wasn't pushing him creatively.

All of this is just marketing, of course, if the games don't show this personal touch. His newest project, Journey, promises to live up to this talk by alienating most core gamers. It's an online game that seeks to remove all of the convenient chatter from the online experience. No gamertags, no voice chat, no text. All the players get with which to interact are a unique identifying mark (so that you know if you've played with that person before), a shout, and one's actions within the game world. The goal of the game is to traverse a vast desert and reach a mountain on the horizon, but the reasons and the method are left unstated. The players are supposed to work toward that goal, either together or independently, and presumably the story will become more clear as they do so.


What excites me about this project is the attention to how players interpret the actions of others in a video game. Anyone who follows professional Starcraft has seen how playing a game can be a form of expression, but most online games do little more than provide a list of canned animations and phrases. Starcraft's example is that the game itself ought to be enough, and the question is whether an inteface on the PS3 can allow for expressive gameplay rather than relying on a layer of menus and XBox Live features to pretend that anything like communication is happening. 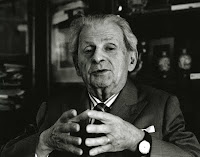 Emmanuel Levinas, a 20th-Century Jewish philosopher who worked hard to develop an ethics out of the work of Edmund Husserl and Martin Heidegger, concentrated on the "face-to-face" of human interaction. For Heidegger this meant a recognition of the other as being fundamentally the same as oneself, but Levinas went further. He said that when one encounters the other there is always already a responsibility for the other, and that this innate commandedness is fundamental to any such experience. Every human interaction, then, is already a response.  Furthermore, it is this act of being "singled out" by the other that establishes one's own identity.  That's right: "face-to-face" interaction with others is fundamental to our being in that the gaze of the other establishes us in our being.


I'll try to leave the explanation of Levinas to just that, but outside the context of philosophy it seems a relatively odd claim. In context it's clear just how bold a claim it is: that such relations, such responsibilities, are the primordial foundation of all human interaction. More to the point, it is the experience of being faced with another person that allows us to recognize our own personhood.

So far online gaming has built its social elements by making chat programs bleed down from above into the games, but a project like Journey promises to start from scratch, making us interact in ways that are similarly primordial for a video game. That is to say, reducing our social gaming experience to the initial revealing made possible only through gameplay itself. My hope is that this will make it possible to have an online game without a "gamer culture", letting us discover for ourselves what playing a game together really means.

Anyone who played Ico has experienced the prototype of this experience: Yorda was a character within the game world whose plight was the same as the protagonist's, and as the player one couldn't help but feel that connection by proxy. But Ico only shed light on how far video games have to go: ultimately the character players felt kinship with was a mess of pre-scripted weakness and extremely convincing animation. Once the façade breaks down, once the glass darkens and the player recognizes the experience for what it is, this interaction becomes tiresome and irritating. The great promise of a project like Journey is for us to experience Ico's fellow feeling on a truly human level, one that never reduces to rote interactions. As a commercial enterprise, the odds are against this project's success.


The core ideas behind Journey are, to me, a breath of the freshest air. The question marks that plague the game all have to do with everything we haven't heard: how the gameplay is actually going to keep people working together for an extended period, and how the game is going to make its multiplayer experience last more than a week after its release. My fear is that TGC is going to undermine itself by removing all of the traditional or comfortable elements from its game; without the hook of engaging and satisfying gameplay--elements of game design that Jenova Chen apparently considers himself to be above--to hang it on, all the audacious and brilliant social commentary in the world isn't going to make a mark on the industry. Which is probably fine, because the industry would only have learned all the wrong lessons from it anyway. But this brings me back to the point I started with: that sometimes the industry is better served by an unprofitable, audacious disaster than it is by another blockbuster hit. Maybe in the next few years some new artists can get just enough grant money to push the boundaries of what video games can and should do, and the lack of executives looking over their shoulder is going to let them do just that.
Article Permalink
Older Post Newer Post